Anthony Davis Leads Lakers to Victory in an Overtime Thriller! 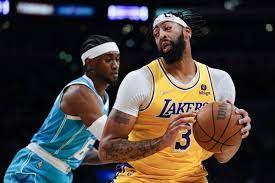 A truly great win for the Los Angeles Lakers. This was a win this team needed! It improved their record to 6-5 moving them up in the Western standing to the 8th spot. They snapped their two game loosing streak in a overtime thriller which Anthony Davis pretty much dominated to lead his team to victory tonight. Carmelo Anthony giving his 29 points off the bench was a huge bonus. Without him and Anthony Davis they would’ve lost this badly. The Hornets showed a lot of fight and show how good this team could be later in the season.

The depth of this young Hornet team is serious. Guys like LaMelo Ball, Terry Rozier, Miles Bridges and Gordon Hayward can all put points on board and most of them showed it tonight. LaMelo Ball had his 2nd career triple double of 25 points 15 rebounds and 11 assists and Terry Rozier had a loud 29 points, shooting 11-22 from the field. Both those guys gave me the sweats as during this game thinking either one could take over and end the game. Overall this was a great Monday night game, both team competed super hard and a lot of skillful plays were made as the top players performed like they should.

I’m glad my Los Angeles Lakers came on top as victorious and hope they can build on this win for next couple games.

Anthony Davis was all around force tonight. He led all players in the game with points (32), rebounds (12), steals (3) and blocks (5) in 43 minutes. Anthony Davis also shot the ball efficiently 13-25 from the field. Overall, he was the true star of the game from both ends of the floor. He barely showed any dip in his play in the quarters he played.

The biggest concern was Lakers discipline in this game and in general. The Lakers had 23 fouls tonight, including one foul from Austin Reaves and three straight technical fouls which allowed Lamelo Ball to have five easy points from the line in the end of the 4th quarter. Eventually leading the Hornets to tie the game from a Miles Bridges 3 point shot. Coach Frank Vogel should’ve controlled his players at that moment and tell his players not to argue at the referees. The Lakers are currently sitting at 4th in the league for most fouls per game at 20.7. It’s very early in the NBA season but if this doesn’t get any better, its gonna be very tough for them to win games this year.

Carmelo Anthony turned the clock back to 2012-2013 and balled like he was in his prime again. Scoring 29 points (new season high) off the bench shooting 7-10 from the three point line and 9 -13 from the field. This was a prime New York Knicks Carmelo Anthony performance. Throughout the game he gave the Lakers points they desperately needed. Without him in tonight’s game the Lakers would’ve ended up with a loss.

← Swat It To The Cheap Seats; Cheer Like Your Hair Is On Fire Are The Cavs Legit? →