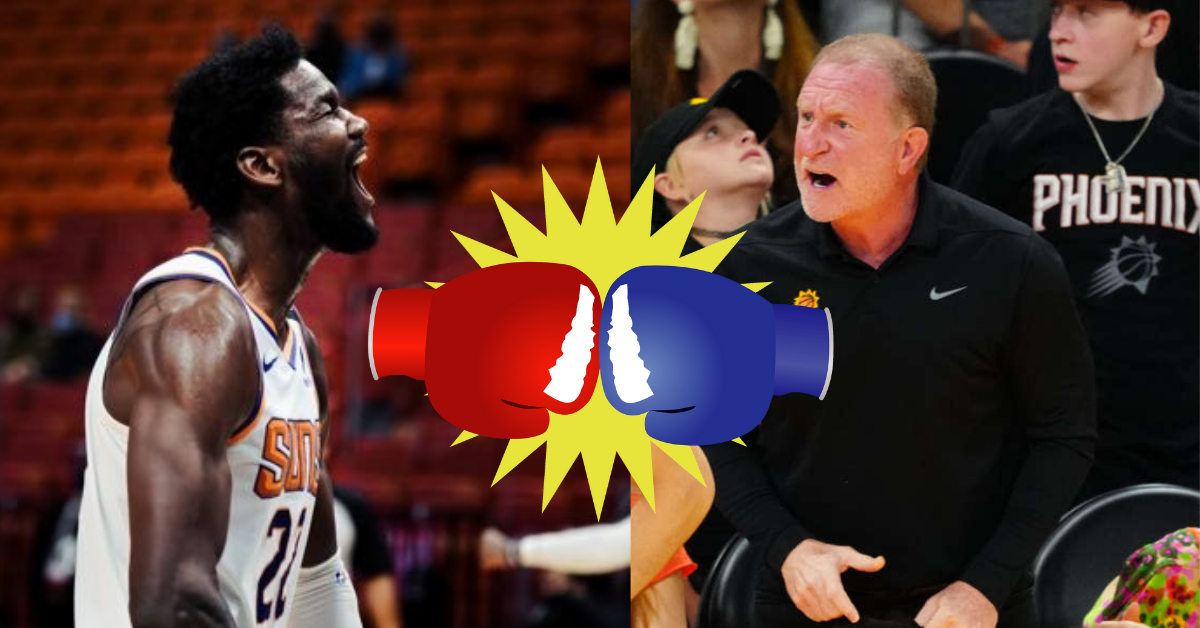 Three years ago the Phoenix Suns selected a seven foot center with the first overall pick in the draft. This was the very first time in Phoenix Suns history that they had the #1 spot. Every mock draft had Ayton’s mug plopped right up top the list. To nobody’s surprise the Bahamian big man was on his way down Interstate 10 West to Talking Stick Resort Arena.

Deandre Ayton is a towering paint beast capable of so many things including but not limited to: face up and back down scoring, elbow jumpers, standing and driving dunks, rebounding, rim protection, and and an array of post moves. Many including myself still consider him a top shelf center and the prototype 5 to any GM’s roster building process.

True he isn’t the floor spacer that some of his peers are, but he can single handedly feast on the boards and rule the painted area. These are two things that cannot be understated. In his first season Ayton was recognized for his fantastic rookie campaign by making the All-Rookie 1st team. This was an honor he shared with two other players many see as future hall of farmers (Ice Trae and Luka Doncic). Unlike those two, the aforementioned Ayton hasn’t signed an extension, and it doesn’t look like that’s about to change.

Now let’s switch gears and talk about Robert Sarver, the owner of the Phoenix Suns franchise. He bought the team in 2004 and since then success has been a roller coaster ride to say the least. A few years they were the class of the western conference led by two-time MVP Steve Nash.

Other years they were bottom feeders with a stretch that saw them win only 87 out of 328 games. He has been known to meddle in areas he knows little and undermine coaches and their game plans. He is a sports fan and like all sports fans thinks he knows more than anyone about basketball. He’s gotten into disputes over contracts with players like Joe Johnson, Eric Bledsoe, and Raja Bell. Sources say he [Sarver] told Bell that he deserves an extension, but he won’t give him one because he doesn’t have to.

Sarver is notorious for his draft day trades including a trade that involved Nate Robinson to the Knicks, and Luol Deng to the Bulls, and even THE Rajon Rondo to the Celtics. Why he felt these first rounders weren’t good enough for the team will puzzle the masses for centuries to come. Even more frustrating is that each deal involved a first round pick for the next year and once the player was drafter the cycle repeated itself.

The madness doesn’t stop there though. In 2007 they traded away two first round picks and a slowly declining Kurt Thomas to the Super Sonics, Oklahoma City Thunder, for a meager second round pick. It’s understandable they would want to move Thomas but the two first round picks is lunacy. Especially when you take into account that the pick that they received from the Phoenix Suns was used to draft Serge Ibaka.

Yet, these trades and more can’t all be put on the shoulders of Robert Sarver seeing as though the General Manager, the President of Basketball Operations and Assistant General Manager have a hand in the front office shenanigans that took place in Phoenix. Steve Kerr , the General Manager for a few years, was even quoted saying he was a moron for the Shaquille O’Neal trade.

What are rookie extensions

Well to better explain the rookie contact and the ensuing extension to this contract. I must describe the contents of a Uniform Player Contract and a Standard NBA Contract. For a full explanation of the NBA’s Collective Bargaining Agreement this link is the place to look: https://cdn.nba.com/manage/2021/03/2018-19-CBA.pdf

A Uniform Player Contract is a standard contract given to a player by the team that they are affiliated with. Exhibit A of the 10 potential exhibits is non negotiable; this is the longest section of the CBA. All contracts and extensions of this type must cover up to 4 seasons from the date they are signed, though certain rules explain when the first season of the contract is counted.

The Standard NBA Contract is exclusive to players not on Two-way contracts. Two way players, however can gain access to a standard NBA contract once their team option is picked up.

Now, a Rookie Scale Contract is the Uniform Player Contract given to a team’s first round draft picks. These contracts are for two years and the team has an option to extend it for two more years. The amount of money a rookie player will receive is dependent on the rookie salary scale. In a players CBA is exhibit B-1 which speaks on the rookie salary scale and its numerous details.

An extension as the name would suggest is an attachment or amendment to a contract that adds seasons to its term. There are four types, but for now we’ll discuss only one. Any rookie contract can be extended before the player’s fourth season, but only after the offseason starts and before the new season begins. This is officially known as a Designated Rookie Scale Player Extension. It adds 5 more years to a players rookie deal including the final fourth year.

A lot more information is in the CBA for a player’s extension but all we need is a general understanding to further establish a reason for the goal line stand between Sarver and his franchise big.

It wouldn’t be fair to cover this story without mentioning the many other failed contract extensions over the years. This uncertainty of whether a player will progress or digress upon a new deal could possibly be the main reason for the standoff. A short list of some extensions that didn’t pan out well are as follows:

Extensions can be tricky

Chandler Parsons signed a 4 year deal for 94 million and only ended up playing 34, 36, and 25 games for three seasons with Memphis because of multiple surgeries. He averaged no more than 8 points when he was on the court and less than 3 rebounds.

Rashard Lewis did fine in Orlando for his first two years but the slow decline was already in motion. By 2010 Mr. Lewis’s offensive rating fell below the league average, and he had missed significant time over the remaining years of the deal.

Derrick Rose is a sore subject for many people and a tear jerker for some. Though, it wouldn’t be a list of failed extensions without Chicago’s son. D-Rose was an MVP, Rookie of the year, an All NBA team winner and the recipient of many other accolades. This success was short lived because eventually he suffered a number of injuries. Most notably the ACL tear in the playoffs the first year of his extension. The Bulls were basically paying him 94 million to rehab. He missed the entire season after that and only played 10 games the year following.

Other names many people think of when discussing bad contract extensions are the likes of Penny Hardaway, and Stephon Marbury.

Does Denadre Ayton Deserve An Extension?

I’m not qualified to say whether or not a single player deserves anything. The team will evaluate their game and weigh it versus the cost then make a decision based on what they find. I view Deandre as not only an important piece to the Phoenix Suns team, but the best big on the market next year if Sarver and company choose not to pursue an extension.
After viewing his last season stats and the historical run to the first finals in almost three decades, you would think that the alarm bells would be ringing and he’d be on the top of the team’s to do list.

Ayton has averaged 10 rebounds a game all three years of his career. Last year he was top 20 in every single category he was eligible for from win shares to offensive rebounds. Up and down the board it’s a no brainer that an extension is needed. Ayton has even voiced his frustration publicly amid the contract dispute. The deadline is on the 18th of October and it’s still silent from both parties on any forward progress. Alas for now we will just have to wait and see what happens.

PSA to all my Phoenix Suns fans in attendance today, for more related articles check out this link: https://thepeachbasket.net/revenge-of-the-suns/