Revenge of the Suns 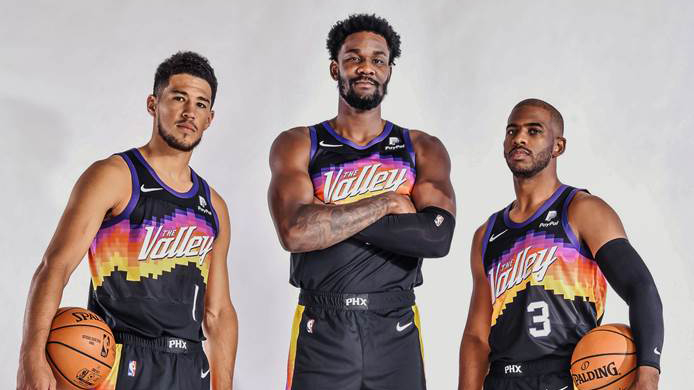 REVENGE OF THE SUNS: In less than two weeks millions of NBA fans will find themselves glued to the couch, and their tv frozen to the channel showing their favorite basketball club. Though for us Phoenix fans the start of this new season is a pimp-slap back to reality, The reality that saw our team dismantled by a very “determined” Bucks team. Still though, as good as our season was, and the tremendous big three we put together it’s hard not to be confident that we could run it back. A few things have changed as far as the roster and the staff, but whether these changes will help or hinder the team is still a toss up.

A few notable new editions include the 6’4” two guard Landry Shamet, the 6’3” point guard Elfrid Payton, and the 7-foot journeyman JaVale McGee. Though every year as teams acquire new assets losses to old ones are inevitable. The Phoenix Suns said sayonara to Torrey Craig, and Jevon Carter to name a few. A full run down of players added and lost is provided on thepeachbasket YouTube channel that link is provided here and you can watch here:

On paper it seems as though in every area we got better, and that’s what excites me about the new season. Also let’s face it, even the garbage can teams with absolutely no shot this year have some sort of optimism and kid-like belief that this could be THE year. This belief in your squad ultimately sparks the preview shows, the roster run-downs, and all of the buzz surrounding the teams this time of year.

Every team has a ceiling and every ceiling has its height limit, this being said the Suns may have one of the highest ceilings in the league. Last year they were 2 games shy of the no.1 seed in the West, and they were 2 games away from the very first Larry O’Brien trophy in team history. For a team so close to the leagues greatest prize the ceiling is higher than ever before, and like their logo their future is bright as the sun. Of course the team’s success rests on the shoulders of their big three, similar to many other teams in playoff contention. The 2021-22 Phoenix Suns are play off bound for sure and once you make it to the tournament it’s just luck, skill, grit and will.

With every new year we dream of winning records and clean sweeps, but unfortunately we must face our biggest fears as well. Some teams have a superstar with a bad knee, other teams are afraid of the skills of their players and how a once promising prospect is fading into an undeveloped liability. Either way we all have concerns, and the biggest concern for the Suns franchise is Chris Paul. Not because of fear that he won’t perform, but that his nearly thirty-seven year old body can’t handle the 82 game grind, plus a 16-28 game post season on top of that. It’s a tall task for a man in his 30’s to play 100% on offense and defense for 30+ minutes per game and its going to be a recurring worry in our minds every time he hits the hardwood for another matchup.

In Conclusion, this season is going to be a wild ride for Suns fans all across the country. The team was a Cinderella story last year, but now I am certain that nobody is taking them for granted. The team added five new great additions that help our team in various ways. As well as waving goodbye to players we felt no longer gave our team a chance. Our ceiling is high and we’re continuing to climb as we get better and better. This should be a historic year for the Suns and their fans, hopefully ending in the redemption of our playoff demise, thus the revenge of the Suns.

← Is Russell Westbrook A Good Fit With the Lakers? Out for at least 8 weeks, Trevor Ariza undergoes surgery →