The Most Exciting Bench in the League 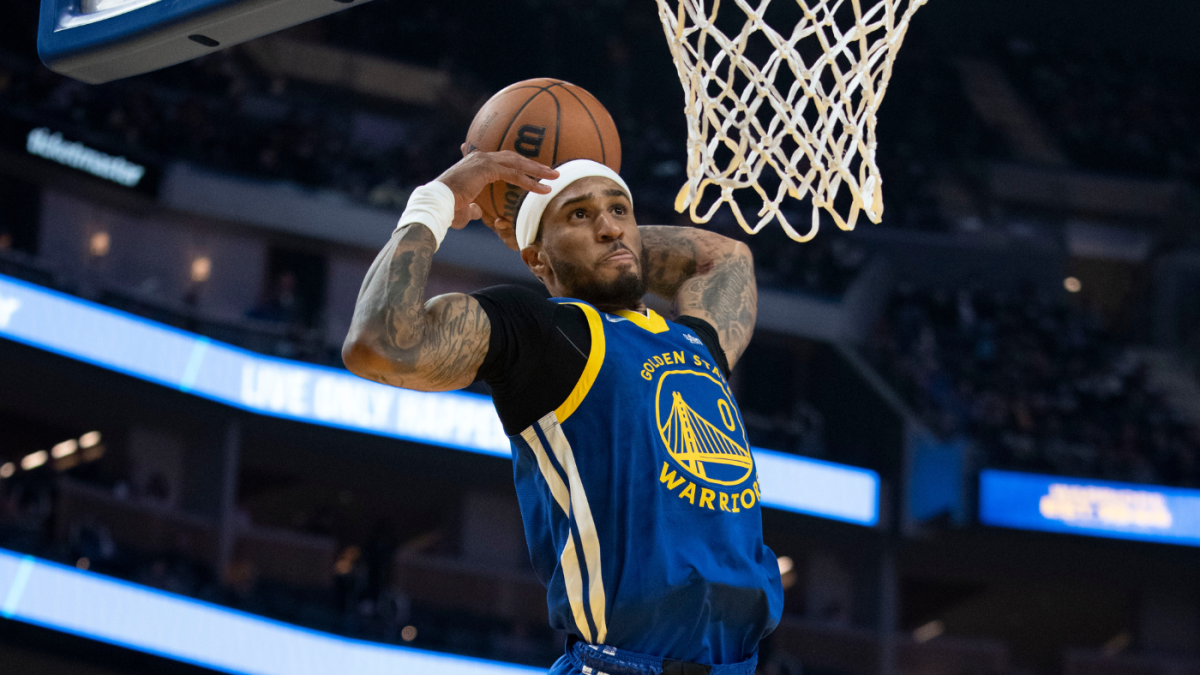 For years Stephen Curry has been the reason that the Warriors are exciting. He’s not just a fun player to watch during games, he’s even exciting in his warmups. This year, he continues to impress, scoring 28+ points per game, and is an early-season favorite to win the MVP. Until he retires, he will remain the main attraction. But this Warriors team is exciting for many other reasons as well: Andre Iguodala is back and looks 5 years younger, Draymond Green is rejuvenated, Andrew Wiggins is finally finding his role on the team, and Klay Thompson makes his long-awaited team. However, none of those reasons are why we should be excited about the Warriors this year. In the 2021-2022 season, the Warriors have the most exciting bench in the league. This bench has helped them to 11-1 and makes them the most exciting team in the league.

Jordan Poole doesn’t deserve to be on this list. So far this season he’s not playing like a bench player, at 17.5 ppg he’s playing like someone fighting hard to make their first all-star team. This is true, not only because he has the starting role until Klay returns, but because of the jump he took this offseason. He first showed signs of significant improvement when he was handed the starting role in the preseason and made the most of it. This improvement has continued into the regular season, earning Steve Kerr’s favor, and occasionally carrying the team when Steph was struggling. If Poole was on almost any other team he would be a season-long starter, if not a budding star. But while Poole may not deserve to be on this list, he is, which is one of the reasons this Warriors bench is so exciting.

The best teams often have a starting-level player come off the bench for them. John Havlicek on the Celtics, Manu Ginóbili on the Spurs, and Andre Iguodala on the 2014-2019 Warriors. This season, the Warriors have Jordon Poole. What makes him so exciting is his ability to fill multiple important roles on this team. He can cut like Andrew Wiggins, run the offense like Steph, and shoot like Klay. He’s not as good at these aspects as any of these players, but his ability to do all of them makes him an important piece to this team. When he comes off the bench, he’s is always able to fill the role that’s needed.

Compared to the pre-Kevin Durant Warriors, Jordon Poole will fit into a similar role to Shaun Livingston as the off-the-bench shot creator. But he’s better. He can create better shots, play off the ball better, and has significantly longer range. Another month of starts will be good for Poole. Once Klay comes back, Poole will have grown comfortable in his role on the team, ready to fearlessly lead this exciting bench unit.

Damion Lee began his season by losing out to Poole for the temporary starting gig. However, that doesn’t mean he should be counted out. Last year, Lee put himself on the map by hitting a game-winner over the Chicago Bulls. But before that, Lee spent a number of years in the G-League before earning his spot on this Warriors roster. While many fans were sad when Kevin Durant left and both Steph and Klay picked up yearlong injuries, seasons like 2019-2020 allowed Lee to prove he deserved his spot on this roster.

Lee has a consistent jump shot, a pretty high basketball IQ, and is able to play a couple of positions. While those are important, they aren’t what makes him exciting to watch. If you haven’t watched Lee play before, he is one of the most joyful players to watch. If Steph’s presence on the court makes the Warriors good because of the extra attention he brings, Lee’s presence on the court makes them good by changing their attitudes. This team is always having fun while he is on the floor. There’s something about a team combined of all-star caliber players and former G-League players that makes them the most fun team. Damion Lee is a huge part of the atmosphere on this team.

Last season Steph Curry did what he does more than anyone else. He caught a ball on the run behind the 3-point line, went up for the shot, and the whole arena knew it was good. One of those who knew it was good was the teammate who passed it to him. What was his name?

This was when Juan T. introduced himself to the world (Steph supported him in informing the masses of his existence). He was also at the center of a post-game scuffle with the Pistons that same season. This led to Draymond’s famous “I’m rcokin’ with Juan T” line (NSFW language) and the corresponding t-shirt.

But Toscano-Anderson is exciting for more reasons than having his teammates publicly support him in hilarious ways. In fact, it’s the reason why his teammates support him that makes him exciting. From East-Oakland, JTA is a hometown kid playing for his hometown team. After playing 4 seasons at Marquette, JTA played a few years in foreign teams before landing in the G-League in 2018. Like Damion Lee and Gary Payton II, JTA fought hard and overcame adversity to make it onto this Warriors team. And it’s obvious when you watch him on the court. Depending on the matchup, Toscano-Anderson’s minutes very heavily. Some games he receives significant minutes and others plays only in garbage time. However, his constant engagement with the team, whether on the court or bench, is what makes him so exciting. He’s always been happy playing basketball, and that joy remains today.

Unfortunately, he hasn’t made a significant impact on the court so far this season. But the chemistry that JTA adds to this team, whether on or off the court, has caused his teammates to love him. When you watch the Warriors celebrate and cheer each other on while they continue to win games, know that it’s not just because of Steve Kerr and Steph Curry. It’s also because of guys like Juan T.

How has every team passed on this guy? Why did the Warriors cut him before the season, only to sign him again? Since the 2016-2017 season, Gary Payton II has struggled to find a role in this league. But this season, everything has changed. Sure, Steph going off for 50 or passing Ray Allen for most 3 pointers made is exciting, but GPII is the most exciting player on this roster. Which means, if this article is correct, that is is the most exciting player in the league so far this season.

The most impressive aspect of Payton’s game is his on-ball defense. On November 3rd the Warriors played the Hornets. GPII came away from this game with three steals, two of which on incredible ball-handler Ish Smith. On a rewatch of the game, there are numerous possessions that are stopped simply by his presence. So far this season, GPII ranks first on the Warriors in both steal percentage at 4.8% and defensive box plus/minus at +4.5. Considering that he’s playing less than 12 minutes per game, his defensive impact is impressive.

But Payton hasn’t struggled to stay in the league because of his defense. What has been more surprising, and therefore more exciting, this year has been his offense. Because of his tenacious defense he often finds himself running the floor in the fastbreak, where he has no problems finishing. However, he has also been effective in the half-court.

The Warriors consistently get away with playing both Steph and GPII because Payton plays more like a big. He spends much of his time roaming off-ball, either in the dunker’s spot or the corner. While he benefits from playing with gravitational all-stars, his off-ball movement is crucial to his impact. As his teammates make plays for themselves, his defender drifts away from him. While his jump shot isn’t consistent, his hops are. Backdoor and last-minute cuts to the rim have resulted in numerous buckets in half-court sets.

He has also found much success in cutting after setting a screen. Running a play that the Warriors use to run for big man JaVale McGee, Payton uses his fearlessness and high flying ability to catch lobs at the rim while his defender is focused on helping off the screen.

On Friday night the Warriors blew out a revitalized Bulls team. Across the court, Payton saw what should be his model for a consistent role in the league. Alex Caruso has made a name for himself as a scrappy defensive player who thrives on the fastbreak. While Caruso has a better shot and GPII is a higher flyer, there are enough similarities for Payton to consider Caruso a model. This offseason, Caruso made a decent paycheck in free agency, primarily because of the skills that he shares with Payton. The days of Payton jumping from team to team look to be over. As Payton grows into his role, he should look to players like Alex Caruso as a mold in hopes of reaching consistent 6th man status.

In 2014-1015, the Warriors changed the game of basketball forever, ushering us into the modern era. Ever since, they have been one of the most exciting teams to watch almost every season. This year the same is true, but for different reasons. While Steph Curry looks better than ever, Klay is coming back, and Draymond is in great shape, this Warriors team is exciting this year because of what the bench brings to the table. While there are other players on the bench that contribute to winning, these four players make this Warriors bench the most exciting team in the league. As of Wednesday of this last week, they had played the easiest schedule in the NBA. But with a monster win over the Bulls Friday night, the Warriors are proving that they are the real deal.

If you haven’t yet, take some time and watch this team. Look at the chemistry, watch the way everyone cheers for everyone else, and see the significant impact that this bench makes on this team.

Erik is a Bulls fan who lives in Dubuque, IA with his wife and daughter. He is Bulls fan by birth but has drifted ever since they traded away Jimmy Butler in 2017. By day, Erik works full-time for Emmaus Bible College as the Director of Communications and Engagement and is working on a Masters Degree in Reformed Theology from Union Theological College in Belfast, Northern Ireland.

← One step forward two steps back. Lakers falter at home. In the NBA: The New Rule Experiment →