There is Hope In The Numbers 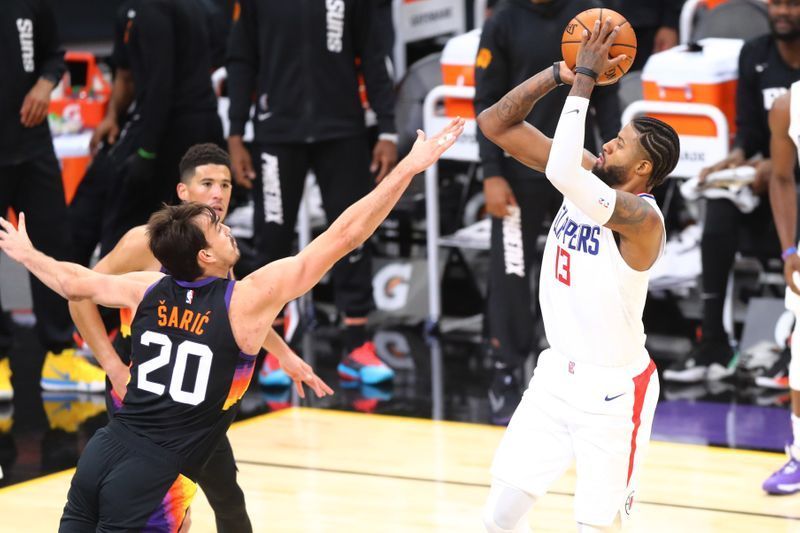 The Los Angeles Clippers invoke different reactions to different people. To some who have followed the game for decades, they will always the team from Buffalo, New York. Others, with a little less history to draw from remember them as the hapless team from San Diego that came to Los Angeles. Most recently, nay-sayers remember the franchise for losing not one, but two series where they were up 3-1. A lot was made of the Joel Embiid calling for patience and faith in “The Process” when he landed in Philadelphia. The Los Angeles Clippers franchise has been through multiple processes’ and none have resulted in the ultimate prize.

Today, the team that made NBA history by winning two series back-to-back after being down 0-2 are down 3-1 to the Phoenix Suns. Clippers fans are quick to point out what would be sweet irony if the team known for losing series after being down 3-1 were to win one. If any one word has exemplified this Clippers team in the 2020-21 post season the word would be resilient. Can they come back to win this series against the Phoenix Suns? Yes, of course they can. Would anyone be surprised if they lose tonight and the Suns advance to the Finals? No, not many would be surprised at that outcome. The best part of being a fan of sports and competition is that both those things are true.

Clippers fans will point to the lack of Kawhi Leonard and even Serge Ibaka, They will point to missed free throws and horrible missed calls. Clippers fans have a point, but then again, so does every losing team in every playoff game in every sport. Injuries, missed opportunities and bad calls are generally all proclaimed as the “real” reason losing teams lose. But what if we take those things out of the equation? If we just look at the stats of games 1 through 4 played without Leonard, Ibaka and peppered with questionable calls, is there any hope for the Clippers in game 5? Or, have the Suns just been dominating the Clippers?

This game was a bit of an aberration in that the Clippers were coming off a Game 7 victory against the Jazz. Game 1 is often times about feeling out the other team. Because of the quick turnaround for the Clippers this game was very much an in-game video session.

Easily one of the biggest heart breaking losses in Clippers history. Some will point to the missed free throws or reviews that didn’t happen. But, this game came down to poor positioning with .07 seconds left. That aside, what do the numbers say?

After two games neither team was able to get any real separation from the other. Additionally, both teams shot just a little worse from deep which points to improved defense. Despite being up 2-0 the Suns have not been overwhelming the Clippers. The numbers show that this is a series between two evenly matched teams. In games between teams like this the outcome normally comes down to the little things. Missed free throws, bad calls, etc. Those things tend to happen in most games, but in games between two evenly matched teams those mistakes are magnified!

This was the first game in the series when either team was able to get a significant lead on the other. In today’s NBA, the the threat of the 3 point shot, I think of a significant lead as 15 points. In a way, this game cancelled out Game 1. This has been the only game where one team seemed to dominate the other. I realize “dominate” is not the best word, but the Clippers were never in an any real danger in this game. But again, lets leave subjectivity out of it and look at the numbers.

While the Suns 3P% went up in this game, their overall FG% dropped. The Clippers played great defense in this game and the outcome reflected that. Despite the big win the numbers continue to show a battle between two evenly matched teams. The primary difference in this game was that the Suns shot poorly/were defended well. Again, in series like these the outcome depends on the little things.

This was the only game in the series to date where there were no lead changes. The Suns led from start to finish. Despite that, the game was not a dominating performance by Phoenix. While they did have a significant lead the Clippers were in a position to win this. But, they didn’t. In a final score reminiscent of NBA games in the 90’s the Suns took a commanding 3-1 lead. The numbers show an interesting aberration.

While At first glance the numbers seem to indicate a dominating performance by the Suns, this was anything but. This was a muddy game that one team survived as much as they won. The Clippers led the Association in 3FG% making a staggering 41.1% of their shots from 3-point range in the regular season. In games 1 through 3 they were shooting 39% from deep, or, right at their average. In this game the Clippers shot 16.1%! They only made 5 of 31 attempts. Worse, according to nba.com/stats, 11 of those attempts came as the player shooting was wide open. NBA categorizes any shot taken with a defender 6+ feet away as wide open. In the regular season the Clippers made 44.4% of their wide-open 3’s. In this game, they only managed to make 3 out of 11 or 27.3%.

There is Hope in the Numbers

The NBA game is a game is oftentimes over-simplified as a game of runs and a game of misses/makes. Sometimes, that characterization applies. The Clippers shot poorly in game 4 and it cost them the game. Every team tends to have a game like that, for Clippers fans the hope is that game 4 was that game for their team. In game 5 they should shoot closer to the 40% mark from deep they were at before game 4. If the Clippers repeat their game 4 shooting woes they will likely be on vacation tomorrow. If not, and they can muster up a shooting game more on par with their norm, they have a real chance.

This game, like most all the others in this exciting series, will then come down to the little things.