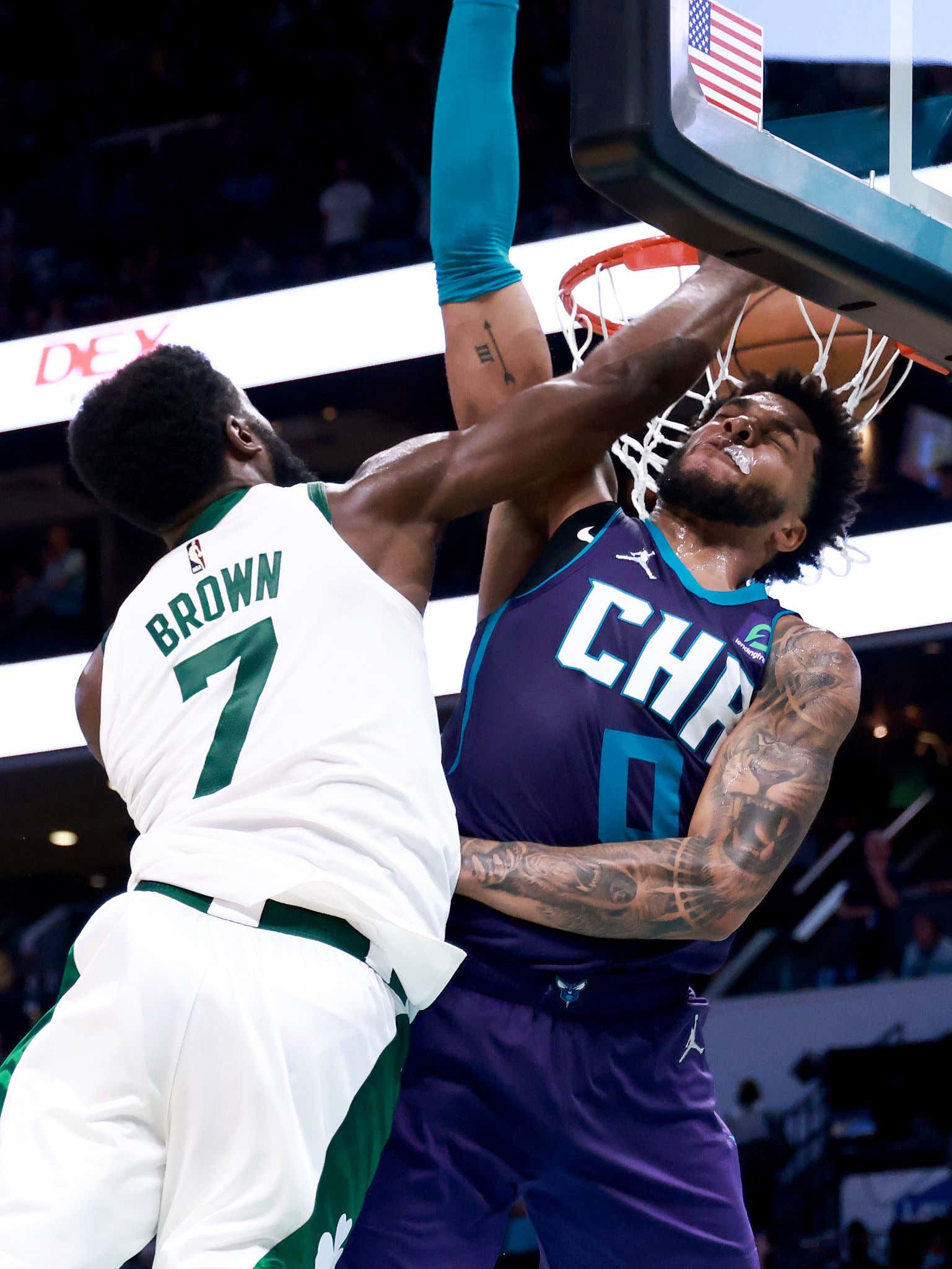 The ball movement that head coach Ime Udoka preached in just about every press conference seems very real. Last year the Celtics were 27th in assist and at times the offense was only iso-ball. For instance, we all know Jayson Tatum and Jaylen Brown tend to go iso because they are superb offensive talents. But last year’s squad was so iso heavy that in his time with the Celtics, Jeff Teague was 11th in the NBA in iso percentage (17.2%). Although the season is younger than most kids, early on, moving the ball is a point of emphasis. Through the first four games the Celtics have a 64.3 assist percentage. This is good for fourth in the league and tonight was no exception as Boston ended with 33 assists on 50 made shots. It’s super refreshing to see guys making plays for others and looking for the best shot most times.

Tatum and Brown had their first big duo game of the season. The young stars combined for 71 points on uber efficient shooting in a thrilling match-up. Tatum was the high man pouring in 41 on exactly 50% shooting. Brown added 30 points on an absurd 60% from the field. While the scoring will always be impressive and most importantly, needed, what I loved was the playmaking. Coach Udoka has expressed his want for Tatum and Brown to find a balance between scoring and making others better. Already this season we have seen the strides both stars have made. Whether it’s making difficult passes with either hand cross court or pick and roll creation. Tatum dished out eight assists tonight while him and Brown made countless passes that led to open looks. These two need to continue to grow as playmakers and leaders together if the Celtics are going anywhere.

In addition to Tatum and Brown, Dennis Schroder looks increasingly comfortable every game. Tonight, he was a driving force (literally) in a really energetic showing. Scoring 23 points and dishing out eight assists, Schroder got the Celtics going with eight quick points. Likewise, his constant attacking is what Celtic fans were so excited about. Although he tends to hold the ball longer than he should, everything he does keeps the defense on its heels. I have always thought Dennis was most effective in pick and roll action and his quickness and passing showed in that action tonight. Above all, he made 4 of his 9 three-point attempts. One concern many people have with Dennis is how he will fair in the catch and shoot department next to the Jays. If he can continue to at least be respectable from three, that will open up the game for everyone on the floor.

In the horrid Toronto game, I felt like coach Udoka was very stubborn. The Raptors went on multiple runs and usually coaches call timeouts to stop the bleeding but Ime never did. There were many points in the game when Toronto would score 10 straight points and Celtic players stopped running expecting a timeout. When the timeout wasn’t called in the 3rd quarter of that game it was the difference. However, tonight the Hornets went up 109-100 scoring about eight straight and Ime let the guys play. Tatum ended up going down and hitting a three to keep the Hornets from blowing it up. The result of letting guys play through runs could vary each game but I’ve come around to the idea. Udoka is breeding this team to be hard-nosed and making them play through adversity is a hill to climb before the end goal. This is just yet another tactic Ime is using to mentally toughen his team up like not wanting them to whine about calls.

Dennis is a role player on this team but he earned his own section this game. Robert Williams, Marcus Smart and even Jabari Parker gave us contributions that were key to victory.

Marcus Smart did Marcus Smart type of things. On a night where he scored 7 points on 1-9 shooting from three, he still found a way to impact the game. Smart made some clutch passes and had the steal that sent the game into OT. Robert Williams praised Smart along with Schroder for their defense late.

Speaking of Rob, the game he played was phenomenal. Timelord ended the game with 12 points, 16 boards, 4 assists, 3 steals and 3 blocks. His defense on the perimeter in Ime’s new switch heavy defense has exceeded all expectations. The activity level and hustle on both ends of the court gives the Celtics extra possessions and ends the other teams’. His actual basketball skills and IQ get lost because of his freakish athleticism. His passing allows the Celtics to run offense through him at the top of the key and the rim protection he provides makes for a sure backline. Hopefully, Tatum’s clutch lob to Rob will make the other Celtics finally hit him consistently on rolls.

Last but not least, Jabari Parker really provided a scoring punch early on. With Horford out Jabari flashed some of that scoring potential that logged him the #2 overall pick. Bari started the game hot and ended with 13 points and 5 boards. It was nice to see him contribute in the best way he knows how.

Overall, this was a great team win for the Celtics. The hope is that the team builds on this performance and starts to click while their chemistry grows.