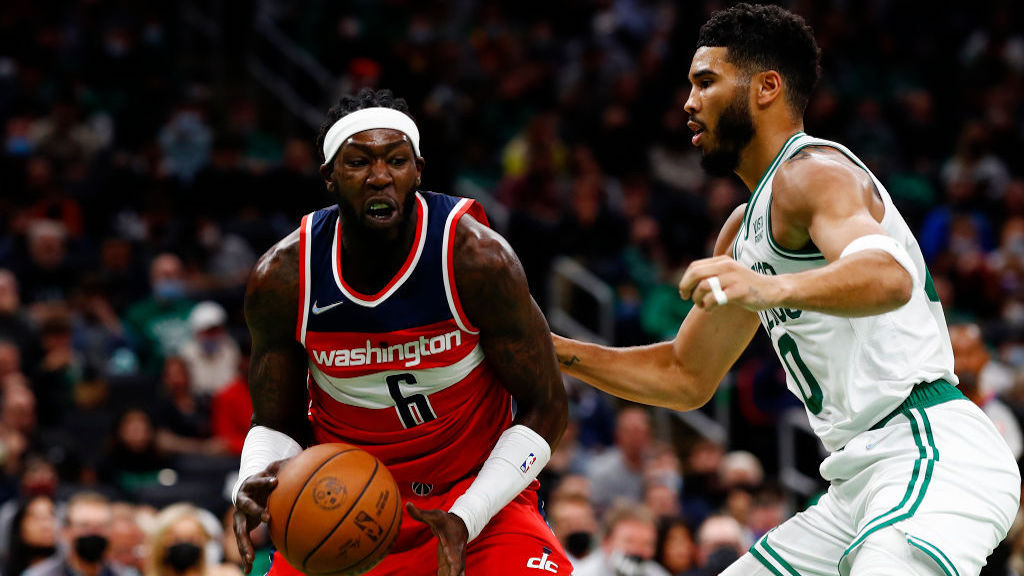 In a mostly negative close loss vs the Wizards, I’ll start off with the positives. Firstly, Dennis Schroder has in fact been a menace. After having two semi-stinker games to start the year, Dennis has shown Celtics fans why he’s here. In his last 3 games he’s averaging 21 points while dishing out 6.3 assists. The Celtics desperately needed another player that constantly makes stuff happen and Dennis is it. His ultra-aggressiveness and quickness allow him to get downhill consistently which leads to his crafty dishes to cutters and finishes. One concern coming into the season was the spacing with Dennis, but in his last two games he’s 8-15 from three. It’s still early but if he keeps showing these shades of his game, he’s an X-factor.

Secondly, Al Horford has proven to everyone that he has a lot left in the tank. In about 27 minutes a game, Al is averaging an impressive 14.7 points and 10.7 board double double. Above all, Al just seems like the glue this team needed last year. Although his shooting hasn’t been up to par, he’s found success in Ime Udoka‘s ever switching defense. On offense, every now and then we see the top of the key playmaker he was years ago. Dennis and Al need to continue this production to take pressure off the Jays.

Being that this is Ime’s fifth game I won’t go all out but he must figure this out soon. We know that Ime is pro double-big and it hasn’t been that bad this year, but everything after that has been a real mishmash. Me and most Celtics fans do not understand why Aaron Nesmith has logged DNPs in two straight games. For a team that lacks spacing most of the times with Smart and Rob on the floor, Nesmith seems like a lock in lineups given his catch and shoot prowess. Furthermore, vs. Toronto and the Wizards, the team just seemed to lack energy and Nesmith brings that. You don’t get a nickname like “Crash” unless you put your body on the line often. Defense is preached by Ime and rightfully so but guys like Josh Richardson have seemed invisible on the court when he was brought here to defend. Nesmith endured the same treatment from Brad Stevens last year and came on strong at the end. Hopefully, it doesn’t take coach Udoka long to throw Nesmith out there.

We saw Nesmith pushed out of the rotation last year so I can’t really say that’s a huge surprise. What is a major surprise, is the DNP of guard Payton Pritchard. Pritchard, a four-year collegiate player, was ready to contribute right away as a rookie. With early injuries to Kemba Walker, Pritchard quickly showed his range and shooting proficiency. To most Celtics fans, coming into the season Pritchard and Nesmith were virtually rotation locks because of their offensive upside. The Celtics lost scoring talents Kemba and Evan Fournier to the Knicks in free agency. We all knew our main shooters would have to shoot at a high clip to give lanes to the Jays but the best two aren’t playing.

Nesmith and Pritchard deserve regular minutes on a team that lacks catch and shoot threats.

It’s rare to see Jaylen Brown have off nights. No, I am not concerned about Jaylen one bit, but there were times I couldn’t decipher if he was hurt or massively disengaged. I’ve noticed a trend with Jaylen ever since he became our #2 option on offense. When the Celtics go multiple possessions without giving Jaylen a touch (which should never happen), you can see his demeanor change. His body language starts to linger and the next time he touches the ball he forces a shot up good or bad. Tonight, there were multiple instances of that and it stuck out more because he had a bad game. Nothing JB did tonight was in the flow of the offense and he got tunnel vision often. This isn’t like Jaylen at all but it was worth noting tonight. I fully expect him to be back on star status in Saturday’s rematch.

During the game, Mike Gorman, the great Celtics play by play commentator, pointed out that no bench player on the Celtics had a rebound. This crazy observation remained true until the END of the 3rd quarter. Altogether, the Celtics bench only had two rebounds. First, the only bench players that played tonight were Richardson, Schroder and Grant Williams. Schroder did his thing but, isn’t counted on to rebound just like the other two aren’t. This goes back to the problem I expressed with the rotations. But rather than Nesmith and Pritchard I believe Al should come off the bench.

This way you will have a certified big man off the bench with Schroder and you won’t rely on small ball Grant when Al and Robert Williams have already been in for 10 minutes straight. Second, I truly think it’s too early to already be going with 8/9-man rotations. The start of the season is where you try different combinations and not burn guys out. Al off the bench, solidifies fluidity in both units then double big plus Schroder mixed lineups with the Jays can play when needed.

Other than Schroder, Jabari Parker was the only Celtics bench player to score from the field. Not good.

Tonight, was another classic Marcus Smart game. Marcus continues his 25.5% shooting start with another 1-7 game. Distributor Marcus also wasn’t on full display either with three assists and two turnovers. While we want Marcus to be a factor on the offensive end, he’s been the complete opposite. These numbers would make anyone else at the guard position unplayable. However, for the second game in a row Marcus has given his all on the defensive side of the ball. He was a huge part of Bradley Beal’s bad shooting night. Marcus continuously fought over screen after screen and showing his bulldog mentality. I don’t know how to gauge Marcus when he’s no threat on one end but a star on the other. One word to describe how I feel about him at the moment is torn. Hopefully, his offense catches up soon.

← Lakers Escape with the win in San Antonio X-Factor OBI? →