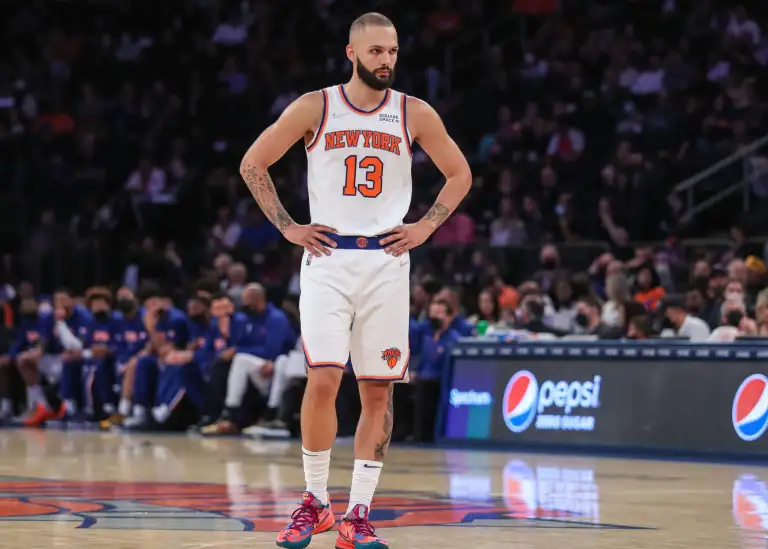 After a hot start to the season, Evan Fournier’s has taken a significant drop-off. Is it time to panic? Is he Evan Fournier or Evan FourNo?

The Knicks have struggled over the past few weeks and currently have an 8-7 record after a terrible home loss to the Orlando Magic on Wednesday. They have some offensive issues that need to be addressed and Evan Fournier’s struggles is part of the issue. According to the statistics, over the past 10 games, Fournier has averaged only 9.7 ppg while only shooting 37.2% from the field. He also has scored less than 10 points in 5 of those games.

As we know, the Knicks signed Fournier to a surprising four year, $78 million deal this past offseason. He was mainly acquired to relieve some of the offensive load from Julius Randle. Now, He did get off to a good start offensively to begin the season. In fact, he was one of the key reasons why the Knicks started the season with a 5-1 record. Since then, he hasn’t been much of a scoring threat. That drop off has cost the Knicks which now has a very stagnant and predictable offense.

Shooting slumps do occur throughout the course of an NBA season. Fournier is capable of breaking out of it but it needs to happen quick, fast, and in a hurry. Coming up on the schedule, the Knicks play the Bulls, Lakers, Suns, and Nets within the next week. The Suns, Nets, and Bulls are one of the top 3 teams in their respective conferences while the Lakers should be expecting Lebron James back very soon.

So, Fournier’s production is going to be needed if the Knicks expect to change things around and beat these elite teams. Tomorrow, the Knicks will be home as they face the Houston Rockets, who currently have the worst record in the NBA at 1-14. This game could be a good opportunity for Fournier to find a groove and gain some of the confidence he had shooting the ball at the beginning of the season( that’s if the Knicks don’t find a way to beat themselves again). We’ll just have to wait and see.

← 3 is Worth More Than 2! Swat it to the cheap seats; Cheer like your hair is on fire →