NBA Playoff Series Update: The Good, The Bad And The Ugly 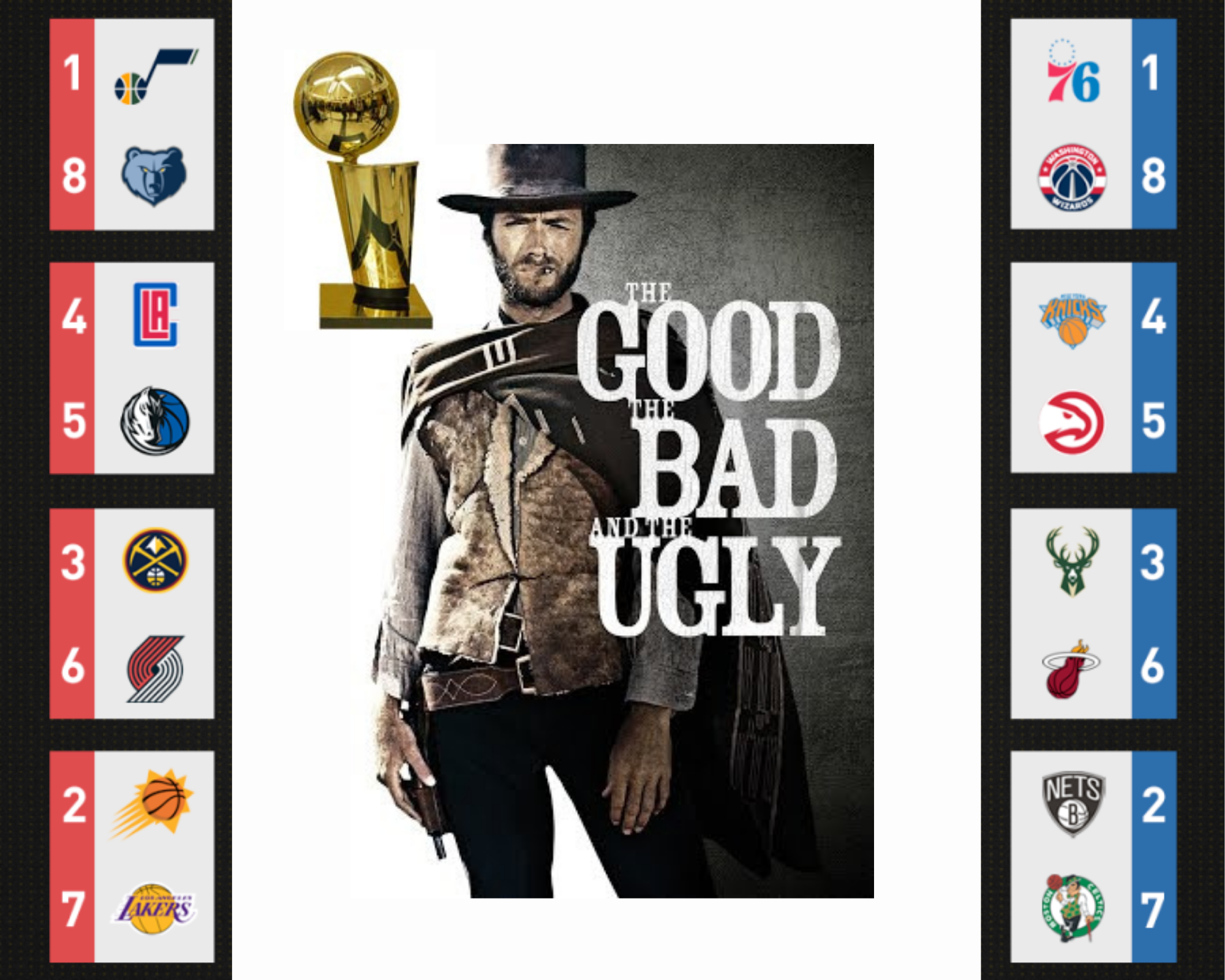 We’re past the better-than-expected play-in games, and a few games into round one. So it’s obviously time to draw conclusions that are guaranteed to hold up. Like predicting the winner after the first game. And then changing your mind after Game 2 goes the other way. I don’t mean to make light of Foot-In-Mouth Disease, I’m just trying to raise awareness.

I basically predicted everything that’s unfolding back at the beginning of the season – proof here. It wasn’t that hard. I’ve watched the NBA before and I have a pulse, so I’m more than qualified. At least I used to have a pulse. After a year of bingeing Netflix I should really get it checked. But I digress.

I admit I was hoping for this matchup. I thought maybe Russell Westbrook and Bradley Beal would at least give Joel Embiid and company some headaches. But even that seems unlikely now. Really the most interesting thing so far was seeing how many grown men it took to stop Westbrook from murdering the Philly fan who dumped popcorn open his head. That was way more fun than the game. Remember when someone in the stands threw a beer at Ron Artest and no one stopped him? Ah, the good old days.

Popcorn incident: Ugly. But kinda funny at the same time.

Remember when the Jazz rested Donovan Mitchell in game one? How’d that work out? The Grizz are no joke. Ask Steph Curry. I love watching young, hungry teams like Memphis. And this Ja Morant kid is a monster. THIS is how you make a 1 vs 8 series fun, Westbrook. Not by stealing some poor fan’s popcorn.

Look, the Grizzlies won’t win this series – I mean, 8 seeds rarely win. Not without Dikembe Mutombo, who’s too busy playing for Geico these days. But still. Kudos.

Geico ad: Funny. And Mutombo DID win as an 8 seed by the way (Nuggets over Sonics in ’94). So, take that, laundry.

I just keep thinking of Adrian in the Rocky movies when she’s watching him get pulverized and can only yell “Stop the fight!” while no one listens. The Celtics have been asking for this all year, and now they’re dazed and bloodied. No Jaylen Brown. Jayson Tatum and Evan Fournier gasping for air after Covid infections. Brad Stevens has gone from the next Red Auerbach to the next Rodney Dangerfield. And that was all before the series started.

The Nets on the other hand, are hard to root for. And not just because Kevin Durant tried to poke Tatum’s eye out. Can we stop letting the best players make their own teams yet? It’s like when the gym teacher would let the students pick their own teams for dodgeball and *somehow* it always ended up the jocks vs the chess club. It’s not fun. Okay it’s fun for the jocks. But still.

Series verdict: Bad. And ugly too.

Dodgeball: Fun if you end up with the jocks. Like Joe Harris did.

The poor Suns. This is their reward for having such a great season. The Lakers are the Nets of the West. Yes, Phoenix won game 1 and they’ll put up a fight. But guess who’s winning this series? It ain’t the chess club. The Lakers are no 7 seed, they’re only there because of injuries. And the fact that the regular season doesn’t matter to veterans. At all. Especially Lakers. Hell, look what Kareem Abdul-Jabbar did during the regular season:

And to top it off, Chris Paul immediately gets hurt and will be a shell of himself for the series. Because of course. Please, more gifts for the Lakers. I’m sure the refs can help, they usually do.

At least Phoenix still has an NHL team. Cause nothing makes more sense than ice hockey in the desert.

Series verdict: Bad. But only because we know how this ends, even if it goes 7.

The Heat ALMOST stole game 1. Then the Bucks punished them for that in game 2. It was bad. Even the Celtics were like, “Daaamn boy, you got beat like a drum”.

But I think the Heat will put up a fight. Either way it’s a pretty good first round matchup. The Heat can be sneaky good. They made it to the Finals with this team last year. Where they lost to…? Oh yeah, the Lakers. Cause that LeBron James/Anthony Davis pairing is super fair. At least those guys were both drafted by LA. Oh, wait…

I don’t mean to sound bitter, it’s just what bitterness sounds like. I don’t even really like Miami. They seem less like a basketball club and more like a night club. But maybe that’s just because someone thought it was a good idea to invite Nike.

This is my favorite first round series so far. They traded haymakers in the first two games. Nikola Jokic squaring off against Damian Lillard. Way better than the usual 3 vs 6 matchups (just like Bucks/Heat – it’s a good year for the 3/6!). And a tough one to call. Denver missing Jamal Murray really evens this series out. I really hope it goes 7. That would be fun.

Too bad the winner of this slugfest is gonna get the Lakers. Hooray!

By the way, these are the two best team names in the league (looking at you “Magic” and “Pelicans”). And they both used to have cool uniforms too, before someone thought it was a good idea to invite Nike. I kid of course. I only pick on Nike because their design choices are consistently awful. Did you see the black Knick jerseys with like 50 unreadable words in a circle on the front? My pre-teen Knicks team had better uniforms and all they said on the front was “Hedden Insurance”.

Hedden Insurance: True story. I was a Knick (a small one). With a better uniform – and mine was pretty bad…

Speaking of the Knicks, this is a great series too. And it includes the Knicks! The New York Knicks! What century is this?

Look, even I can get a little excited about this Knick team. A group of hard-working, over-achieving, written off nobodies. Suddenly Julius Randle becomes a beast? After like ten seasons of looking like Michael Olowokandi? Really? And Tom Thibodeau is a truly underrated coach. If it wasn’t so nauseating to watch Spike Lee celebrate I could actually root for this team!

And on the other side, Trae Young and the upstart Hawks?? These teams are not only evenly matched, but they’re like weird evil universe mirrors of each other. Like in Empire Strikes Back when Luke cuts off Darth Vader’s head and then sees his own face in the cut off head. It’s exactly like that! Finally that scene makes sense. (Yoda told Luke NOT to bring a weapon. What was he supposed to do when he found Vader? Make a TikTok video to a Dua Lipa song?)

the 4 vs 5’s are usually pretty evenly matched, and this pairing is no different. Typically makes for a good series. Although this one involves the Clippers. It doesn’t seem to matter how talented a roster the Clippers ever assemble. In the end, they’re still the Clippers. Pretty soon everyone will be afraid to go there. They’re so cursed the Scooby Doo gang should investigate. The scariest part? The Clips actually played pretty good so far and STILL lost the first two games at home. They got Doncic-ed by Luka Doncic himself. Dallas is fun. This series is fun. And LA is gonna put up a fight – it’s not over yet.

Does the TNT crew ever look happy to be there? They almost seem annoyed by the games. Charles Barkley always looks like he’d rather be in Vegas, and Shaq acts like he just found out those commercials he does for “The General” actually air on television. Where people can see them. Seriously, can they muster more excitement for the NBA Playoffs than they do for reading a Denny’s menu?

I should be part of that crew. Can we make this happen? I did play for the Knicks.

Series verdict: Good. Although if you’re a Clipper fan, ruh-roh…

And that about covers it for the moment. You’ll thank me later.

As always, thanks for playing!