One step forward two steps back. Lakers falter at home. 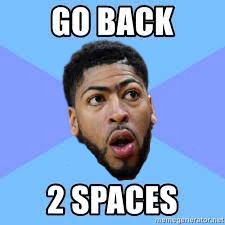 One step forward, and two steps back. It’s a phrase we are all familiar with, and something we never want to hear. The Lakers beat Miami on Wednesday, and looked like they were starting to turn the corner. Then Friday, and the Minnesota Timberwolves, came around. Turning everything on it’s head, and leaving fans feeling lost and bewildered.

The Lakers had been making steady improvements. The game against Miami, while still flawed, was one of their better efforts this season. They finally showed effort and tenacity on defense, and it helped fuel the win. Miami did lose Jimmy Butler to an ankle sprain in the first half, but the Lakers were also playing shorthanded without LeBron. It looked like they might be turning the corner. Especially with their biggest issue, defensive effort. Sadly, it was fools gold.

This team seems to play up to better competition. Sadly though, they also are playing down to weaker competition this season. Two losses to OKC, and now Minnesota prove my point. it’s frustrating and embarrassing as a fan. I don’t mind losing, you can’t win them all, but I hate seeing a lack of effort.

This now makes four games, out of those six losses, where the lack of effort is glaring. I thought after last Saturday in Portland, we wouldn’t see this again. I was sure wrong about that though. The Staples center crowd must have felt the same way, because they started booing in the second half. That doesn’t happen often in L.A.. Those fans are known for being laid back, and even have a reputation for not caring that much. So when they boo you, they mean it.

Additionally Frank Vogel said “There’s no better motivator than a bad loss. I think our guys are angry. Our coaching staff is angry.”

The Sky is Not Falling…Yet

There are still some silver linings thankfully. It’s still very early in the season. Talen Horton-Tucker should be back in the lineup soon, maybe even on Sunday. LeBron James‘ injury recovery is progressing very well, and he should also be back soon. So, there is help on the way.

Effort is absolutely correctable. This is not Westbrook’s fault, or Vogel’s fault either. This is a team chemistry issue, that needs to be fixed by all the players. Maybe they need to have a players only meeting, like Boston did last week. It certainly seems to have helped them. Either way, there is nothing that the usual suspects of scapegoats can fix, in regards to this current problem.

Malik Monk said it perfectly, on Twitter, after the game last night.

← Swat it to the cheap seats; Cheer like your hair is on fire The Most Exciting Bench in the League →