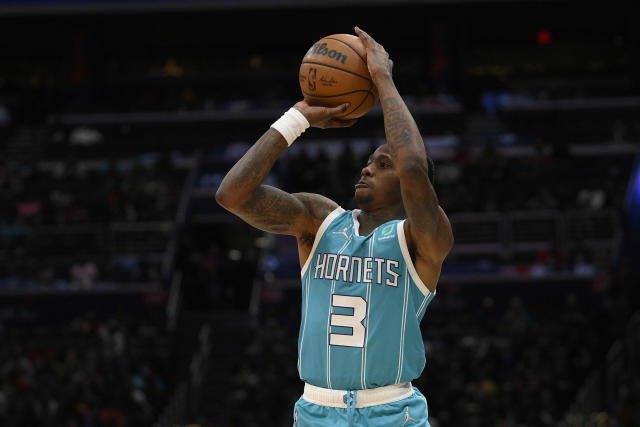 The Wizards seemed to be on the brink of another late fourth quarter comeback. Trailing by 15 at the 9:45 mark of the fourth quarter, Washington continued to compete and eventually found themselves trailing by only 2 with 51 seconds remaining in the game. The crowd at Capital One Arena was really getting behind the team, as they can sense the possibility of another fourth quarter comeback. When a LaMelo Ball alley-oop attempt to Miles Bridges didn’t connect, for a moment it felt like the Wizards were meant to comeback in this game and get the win.

Unfortunately that didn’t happen. After Miles Bridges missed the dunk attempt, Montrezl Harrell was able to secure the loose ball. However, LaMelo Ball made a heads up play to knock the basketball out of Harrell’s hands, and the Hornets were able to secure the loose ball. Not the ideal situation for the Wizards, who are down by 2 with 28 seconds left in the game. But there are worse situations a team can find themselves in late in the fourth quarter. As time winded down, the Hornets cleared the left side of the court for Terry Rozier to go 1 on 1 against Kentavious Caldwell-Pope. After sizing up Caldwell-Pope with a couple dribbles, Rozier elevated for a dagger three to give the Hornets a 108-103 lead with 13 seconds remaining in the game.

Washington still had an outside chance of coming back. But a missed three from Kyle Kuzma followed by a defensive rebound from LaMelo Ball effectively ended the game. Montrez Harrell led the way for the Wizards with 24 points and 18 rebounds. Terry Rozier led the way for the Hornets with 32 points on 8 for 11 shooting from beyond the arc. With a 109-103 loss to the Hornets, the Wizards now trail the season series 0-2. Both teams will face each other again on January 3, 2022 at Capital One Arena.

LaMelo Ball scored 28 points, grabbed 13 rebounds, and dished out 7 assists. If Rozier didn’t have that big three and Charlotte still found a way to win, I would have gone with Ball as the player of the game. Just for the way he filled up the box score and the spectacular plays he made throughout the game. It would have been very close between Ball and Rozier, but Rozier’s clutch three made him the easy choice for star of the game.

The Wizards have played the Hornets twice this season. In both contests, Spencer Dinwiddie really struggled to get going offensively. In the first game against Charlotte on November 17, Dinwiddie scored zero points. Tonight, he scored 8 points on 2 for 11 shooting from the field. I’m not sure why he’s struggling to score against Charlotte, but whatever defensive schemes they have used against him has been effective.

No surprise contributions for the Wizards tonight.