The Greatest Seven NBA players To Ever Touch The Court 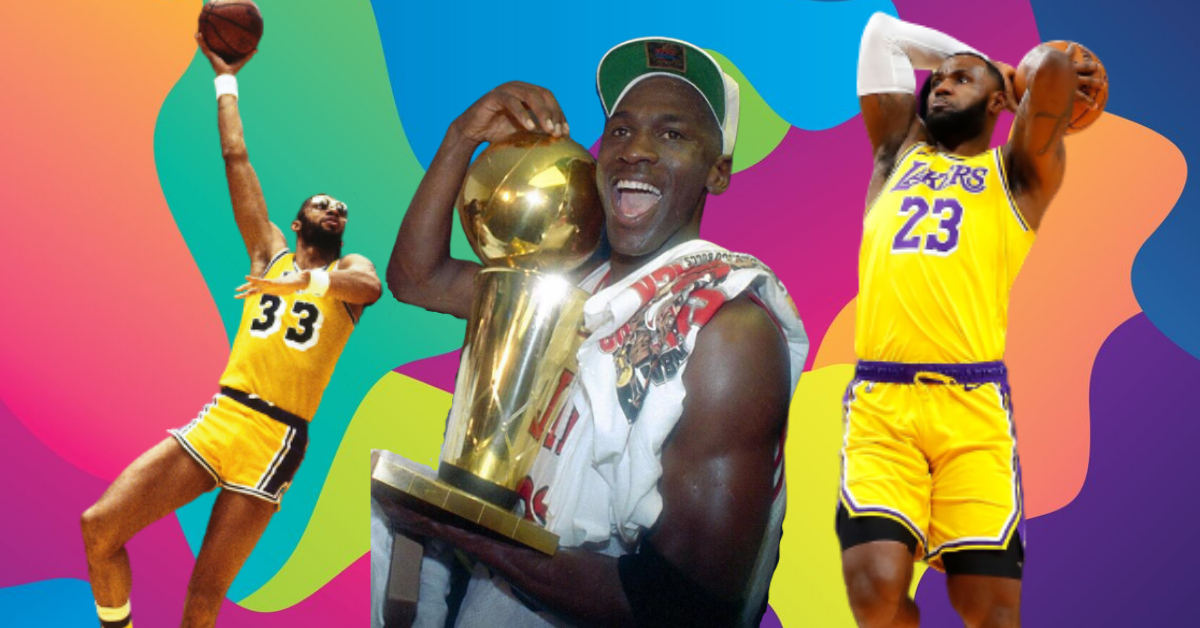 Forget the NBA’s top 75 list, here’s my greatest seven NBA players to ever touch the court in order! There’s tons of NBA players that could’ve cracked my list and it was hard to decide who made it and who didn’t. The players I picked are guys who dominated the league for a certain time and I think they made a huge impact in the history of the NBA. I know its only 7 players I listed and to be honest there’s tons more that could’ve been on. So I name some honorable mentions players who just missed the cut:

Drafted #6 overall in the 1978, Larry Bird made a immediate impact in Boston. A versatile player at the forward position had a great ability to play inside and outside on the offensive end. He was a lethal shooter who took an advantage of the three point line. Making him one of the few players in his era to use this against his opponents. While destroying his opponents with his shooting, Larry Bird was ruthless, as he loved to trash talk whoever was guarding him that night.

3 years in his career, he won his first NBA championship in 1981. Which started a dynasty in 1980s for the Boston Celtics. Winning 2 more championships in 1984 and 1986. The Celtics would’ve dominate the 80s but unfortunately they weren’t the only team building to win. However, the Lakers and Magic Johnson took most of the titles in that decade. Limiting Larry Bird too only 3 NBA Championships. In 1992 he had to retired due to back injures. Larry Legend is the greatest Boston Celtic in history and also the second greatest small forward to ever play. Greatest Seven NBA Players

Back when Wlit Chamberlain played 1960s and 1970s, he was a cheat code. Wlit Chamberlain holds multiple NBA records in scoring, rebounding and minutes played. For instance, he’s the only player to average 40 and 50 points in a season and only player to score 100 points in a single game. He has the most rebounds in a single regular season with 2,149 and holds most career rebounds in history ( 23,924 ). Also holds the record for most minutes in single NBA season with 3,882. And he’s the only center to win the most assists in a regular season in NBA history. He’s someone who dominated the NBA stats categories. His freak athletic abilities helped him dominate the league and no one could stop Wlit Chamberlain in his era beside maybe Bill Russell. Ultimately he was one of a kind and we consider him to be ancient in todays game.

One of the most dominant and entertaining players to ever touch the court. Standing at 7ft 1in and weighting in at 350lb, Shaquille O’Neal aka “Shaq” destroyed opposing teams centers near the basket. His frame made him unstoppable, every time he had ball in the post it was either a easy bucket or a foul. Eventually every teams kept trying to foul him, a strategy call ” hack-a-shaq” so he could shoot the free-throw. which wasn’t his greatest skill. It doesn’t matter though, the big man still dominated the league. Especially in the early 2000s earning himself 3 NBA championships and 3 finals MVP in a row, which hasn’t been done in 19 years. Shaquille O’Neal left the Lakers to Miami Heat to win another championship with Dwayne Wade in 2006. 5 years later Shaquille O’Neal retired in 2011 and now he’s become a NBA analyst, actor and DJ .

The greatest point guard in history, Earvin ” Magic ” Johnson was a phenomenon when playing the game of the basket. After winning the 1979 NCAA championship for Michigan State against Larry Bird’s Indiana state, he brought his championship mentally onto the NBA scene. Immediately making his way to the 1980 NBA finals in his rookie season. He had to played all five positions in those finals. Magic Johnson dropped 42 points as a center in game 6, leading his team to vicotry title since 1973. Magic Johnson’s length and size completely changed the way we look at point guards now. He and Larry Bird made the league watchable in the 80s and also saved the league. Magic Johnson’s “Showtime” Lakers and Larry Bird’s Celtics made the greatest rivalry in history, which dominated the 80s. Combining for 8 titles together. Magic Johnson’s size, passing abilities, leadership and dominance makes him #4 on this list.

Kareem Abdul-Jabbar was ready for the NBA when coming Into the league in 1969. The Milwaukee Bucks drafted the college star 1st overall. The league would soon notice how special his talents were. In 1971, he won NBA regular season MVP and winning Milwuakee’s first title while being named Finals MVP at the age 24 . In the 70s, He showcase his individual skills by winning 5 regular season MVP’s, back to back scoring titles in 1971-1972 and being a multi time all-star. Spending 6 years in Milwaukee, He left for the Los Angeles Lakers in 1975.

Once Magic Johnson got the Drafted in 1979, the Showtime Lakers began. With Kareem’s scoring, Magic Johnson’s passing skill and other stars like James Worthy and Micheal Copper. The 80s were all Lakers, which helped Kareem Abdul-Jabbar win 5 more titles. In 1989 he retired, while breaking many NBA records. Retired 32 years ago, Kareem Abdul-Jabber remains the all-time leader in points scored (38,387), fields goal made (15,837) and career wins ( 1,074). You may asked how was he so dominating offensively for 20 years? Well his trademark ” The Skyhook” shot was unguardable. Which was one of the reasons he established himself the league’s top scorers.

Labelled as the “Chosen one”, Lebron James has proved he’s close to becoming the greatest ever. People would argue he’s already there now but for this list he’s #2. Only because of his age (36), he still has 4-6 years of playing time to achieve to being #1. from year 1 to year 18. His longevity amazes me the most, the constantly of being great is unmatched. For instance, him winning 13 All-NBA First Team which is the most in the NBA history and been on All-NBA for 17 straight seasons. Besides his rookie season, Lebron James has be atleast a top 15 player 17 out of his 18 seasons of playing. Resulting how great his career has been.

His 6ft 9in frame and weighting in at 250lb, a lot of defenders have a hard time stopping him. He can drive to basket, dish the ball to a open man or simply shoot a three over your head. He’s hard to stop and his IQ of the game is something no other player in history ever had. He’s the only player in history to win 3 NBA titles and 3 Finals MVP for 3 different NBA teams. Cleveland Cavaliers for 1 title, Miami Heat for 2 titles and Los Angeles Lakers for 1 title. When Lebron “King” James retires, he’ll definitely lead the NBA history in points, field goal made, minutes played and be top 5 in assists and steals. In the next couple years, Lebron James would need to win more championships and keep winning individual awards to his resume in ordered to be labelled as greatest ever.

Let’s be honest here, we all knew Micheal Jeffrey Jordan would be #1 on this list. What do I need to explain. This man is 6-0 in NBA finals, winning one three-peat in 1991-1993, retired for baseball for a season and a half, then came back to win another three-peat in 1996-1998. He was on the 72-10 bulls in 1996 which is in my opinion is the greatest team of all time. When he came back for the Washington Wizards at 40, he was the oldest player to average 20 points and to score 40 points in a game. He was truly something special when playing basketball.

Micheal Jordan brought this ferociousness when he stepped on the court. His competitive drive made who he is now to this day. He always had this killer mentally when playing against other teams. Destroying them and their guards both ends of the court. He changed the game of basketball off and on the court. No player before him will ever dominated the league like he did and he never took a game off. In conclusion, his winning, his brand, his world famous shoes and his legacy is why he’s the greatest to ever touch the court.

← The Phoenix suns are Setting the League On Fire Through 13 Games! Wizards rally to win against Pelicans →