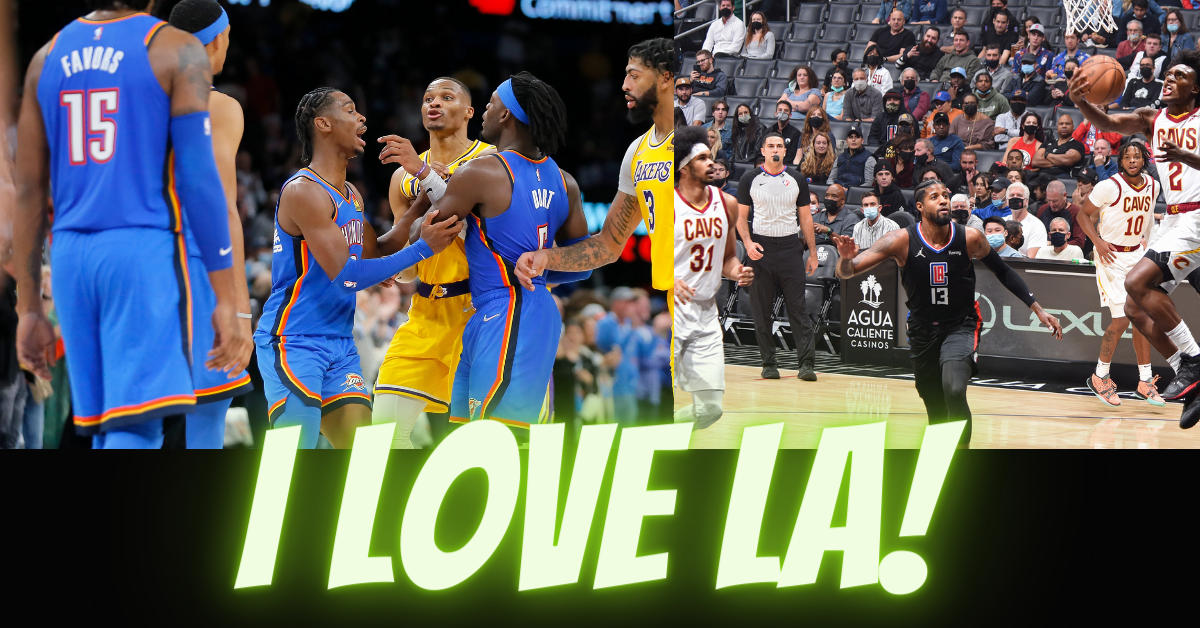 Los Angeles is an interesting place for several reasons. LA is the entertainment capital of the world. It offers attractions and activities: movie studios, the Sunset Strip, Venice Beach, landmark museums, world-famous theme parks, wineries, breweries, outdoor activities, exciting nightlife, and much more. It’s also, what, a city? A town? A county? No one knows for sure!

Someone from out of town might think LA residents would embrace both teams. I mean, on paper that makes sense. But, instead of showing love for the team that plays in your backyard there is a very clear divide between Lakers and Clippers fans. Yesterday, both felt fan bases were united in their disgust after their teams performance.

For one night, Lakers and Clippers fans were joined in unison!

The Lakers were matched up against the winless Oklahoma City Thunder last night. The Purple and Gold got off to a staggering 41-19 lead in the first quarter and you could hear the “Easy W” sigh’s of relief from Agoura Hills to Whittier. Then, the Thunder won the second quarter by 6 points, cutting into the Lakers lead. In the third quarter the young Thunder had the audacity to win by 18 points and actually took the lead! Surely the mighty Lakers would regain control in the final quarter.

No, they did not.

The Thunder won that quarter as well by 6 points and the game by 8, 123-115. It was not a good look for a Lakers team that is not healthy and still working to get to know each other. Russell Westbrook, who had a lot of points, assists, rebounds and turnovers, took exception to the team dunking the ball in the final seconds. His frustration led to an ejection. It was not a good night for the Lakers. Lakers fan HoopDini conveys the thoughts of Lakers fans today.

Unlike the Lakers, the Los Angeles Clippers were at home. They had the entire population of LA County, all 9,696,210 of them to themselves. Sure, the Cleveland Cavaliers are not exactly NBA royalty, but surely some of those 9 million, at least some of the 3,983,540 actually in the “city of Los Angeles would sell out Staples in support of their team! Instead, only 13,276 decided to show up leaving Staples looking a bit empty. Maybe the folks in LA saw what was coming. Maybe someone tipped them off so they decided to show as much passion and excitement for this game that the Clippers showed.

The Los Angeles Clippers shot a dismal 35.6% overall while shooting 22% from the 3-point line and only 61.5% from the free throw line. They played with the passion and excitement of Kawhi Leonard at the Intuit Dome ground breaking ceremony. The 3-2 Cavaliers didn’t play exceptionally well and they didn’t have to. They just played with passion and that was enough for them to take down the team that looked as if they didn’t want to be there. This is where I would link to a YouTube channel of a Clippers fan detailing the loss. But, I can’t find one. Clippers fans just want to forget this one happened and who can blame them!

Overall, it was a forgettable day in LA. But, on the plus side, it united the disparate fan bases in misery for one night. Not ideal unity, but in the large expanse that is Los Angeles, we will take unity in any and all forms!