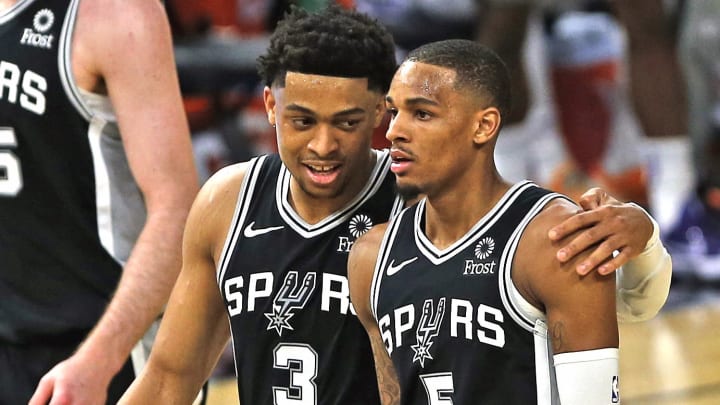 So, hoops fans and Spurs family, it’s been a while.

I hope your summer was relaxed and stress-free because now we’re staring at the 2021-22 NBA season square in the face. It’s staring back too, menacingly. In fact it’s pointing right at us after viciously dunking on our collective faces like Shawn Kemp did to Alton Lister once upon a time.

Can you feel that? I can. Or is that Ben Simmons’ grumbling at leaving Philly? I, for one, am glad the Ben to the Spurs rumors have died down because that means I can run through this preview without mentioning it. But, how about Ben for Kyrie? Does that make sense to anyone but me? Trading problem for problem? Cancels out nothing, yet might make sense? No? Yeah, it’s probably just me then.

Anyway, onto the San Antonio Spurs!

New faces in the office include Doug McDermott, Zach Collins, Al-Farouq Aminu, and Thaddeus Young. Throw in Jock Landale, Australian international, and you have a lot of new guys wandering around looking for the break room.

Spurs fans can also welcome the return of Bryn Forbes, who is still rinsing off championship champagne from last season. He arrives with a ring, some Milwaukee Bucks souvenirs, and presumably a selfie with Giannis.

For an organization that’s been adamant about keeping experienced players around for leadership purposes, this season seems to signal a new approach. The Spurs have one of the youngest rosters this season. They have a lot to hash out.

The Spurs logo should be a slanted question mark

Who will assume the leadership roles? This Spurs squad goes into a season without a definite team leader to set the tone and provide stability. The organization hasn’t dealt with this sort of situation since before David Robinson was drafted. My first assumption would be Dejounte Murray, but it could be any of the young core that Coach Gregg Popovich has been working with these last few seasons. Lonnie Walker could step up, or we could see the emergence of the gritty Derrick White as a vocal standard bearer.

Who will provide the scoring punch? I can’t see any player on this roster averaging more than 20 points per game this coming season. So, Dejounte Murray perhaps? The fashionable pick for me is Keldon Johnson. He made a splash last season with his full bore, relentless style of play. It made him a fan favorite and that was solidified with his contributions over the summer with the U.S. Olympic team that cruised to gold after a few hiccups. Gregg Popovich also happened to coach that team. Nothing the curmudgeonly coach demands should surprise Johnson.

Who will the team lean on late in close games? Who will be the clutch guy? Again, my first guess would be, wait for it, Dejounte Murray, mostly because he will be fulfilling point guard duties. He’s still a work in progress though, which may seem surprising at this point in his career. He still seems to commit baffling unforced errors, and seems to have a loose handle at times. We’ll see if there’s any improvement in those areas.

Doug McDermott could provide a consistent three point threat, along with Bryn Forbes. McDermott seems to fit in that Spurs mold of unassuming guy that Popovich will squeeze the most out of.

Another big issue last season was the interior defense…and offense…and well, everything to do with the interior. Jakob Poeltl stood tall in moments to his credit. Poeltl is limited as far as lateral movement goes, and his free throw shooting was literally comical. Perhaps Thaddeus Young can clog up some of the lane with big shoulders. Jock Landale could provide the Spurs with some of the hoops nous he showed in the Olympics. The further development of Luka Samanic could be something to keep an eye on as well.

The oft-injured Zach Collins could also provide some inside relief for Poeltl, in addition to perhaps forming a formidable Ivory (twin) Towers dynamic.

Gregg Popovich is the only concrete element on the floor at this point, and unfortunately he’s on the sidelines. Popovich is entering his 26th season as head coach, and from all accounts seems poised to coach into the 2022-23 season. He has been a model of stability for the franchise and his work with the present young core should prove to be yet another challenge for the veteran coach. His savvy should be worth 3 or 4 wins alone.

Speaking of wins, Popovich only needs 26 wins to become the NBA’s winningest coach, surpassing the retired Don Nelson. I warily predict that the Spurs win total will be in the neighborhood of around 30 this season, so Spurs fans may have something to commemorate if and when that happens.

There have been grumblings from the Spurs fandom regarding the coach and whether he has stayed past his prime, and that’s a credible critique. Nobody is above criticism obviously. That’s another story line to look out for as the season progresses.

What does this mean for Spurs Family?

It means a long season, though one that I think could ultimately prove to be very interesting. With that many questions looming, more than a few of the answers are sure to be surprising. It’s a new day, finally, for the Spurs. And as this organization seems completely averse to tanking, this is as much of a complete retool as we’re likely to see.

As a fan, I’ve become resigned to the fact that winning happens only once in a while, and that you have to savor it as much as possible. Most nights all a fan can do is hope their team gives them a reason to watch the whole game. The same goes for a season.

As a Spurs fan, I’m just hoping they give us reason to watch games late in the season, even if it’s just about getting a sniff of the play-in tournament.

The rebuild is on in San Antonio. We shouldn’t just write them off as a bad team though. The Spurs still have a Hall of Fame coach, a system in place, and a front office that puts their complete trust in the coach’s/president’s vision. The overall consensus from players is that they will be running up and down the court and playing intense defense, so they may provide a few highlights along the way. The days of 50 win seasons are well behind them for the time being, but this squad will still make your favorite team work for their W’s.