Being a Skilled Big vs The Skill of Being Big! 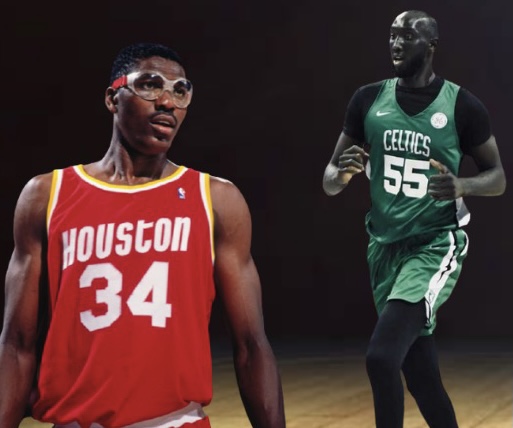 I know we’ve all seen players who got scholarships to play college ball and the only impressive attributes they possessed were their measurements. These height blessed players really only have to do two things to get coaches on the phone: Be healthy, and be big. I mean let’s face it, you can’t coach tall. That right there is a God-given trait that pretty much tips the scales in your favor from the moment you walk into tryouts.

However, this gene is nowhere near enough to make you an All-Star on its own. Players at that 4 and 5 position need to be mobile, quick, intelligent, strong, well conditioned, tenacious, and have an array of post moves that he can whip out of his “bag” (popular phrase amongst today’s hoopers.) So what’s the difference between being a skilled big and being a guy who’s only skill is that he’s big. LET’S TALK ABOUT IT!!

A skilled big man is a power Forward or Center who possesses certain guard like characteristics. These gentle giants are graceful and fluid, yet powerful at the same time. Most skilled bigs have either an advanced passing ability or an impressive shooting stroke. Some anomalies have both and this unstoppable combination creates players like: Nikola Jokic, Anthony Davis and Joel Embiid.

Some of the NBA’s top big men fall into this category while most of the busts are in the latter. This is possibly due to the fact that just like guards you can’t be a one trick pony. An offensive minded player must have a signature move, a go-to shot, and elite to average ball handling ability. While a defensive minded player will need quickness, high defensive IQ, play recognition and great instincts to quickly jump passing lanes or block shots.

This article is about big men, but quiet as it’s kept these are things every “skilled” NBA player should have in their arsenal. The problem is big men are viewed in the same way as the Incredible Hulk, they need no technical skill and no elegance just go SMASH!! This way of thinking will doom a young man before he even signs his rookie contract. Why? Because telling a big guy to just be go be tall is the equivalent of telling a fat O-lineman to just go use your size. Over the years we’ve learned that the heavier lineman is not automatically the best on the field. He’s often too slow to reach the linebackers, he’s not quick enough to get in and out of his Stance at the snap, and often isn’t nearly agile enough to block those D-lineman who seem to get faster and stronger each year.

Also, just like weight doesn’t equal strength the same can be said for height and how that doesn’t equal skill. I’ve taken it upon myself to show you all 5 of the most skilled big men in the history of the NBA.

Top 5 most skilled NBA big-men (asterisk by Hall of Famers.)

A somewhat opinionated list players, but the facts of their greatness cannot be debated. Skill amongst the trees is something that needs to continue to be stressed and the over-stressed in order to preserve the integrity of the league and save the careers of young prospects.

Guys Whose Only Skill is Being Big

If you turn on your TV and flip over to a channel broadcasting an NBA game you’re bound to witness some of the largest human beings on the planet. Players whose wingspans and body length defy comprehension. In fact, there’s a joke that many people like to use about tall people in general: “Wow, you’re so tall you must play basketball”. Usually accompanied by an awkward fake laugh and 30 seconds of their life that guy just wasted. Being tall though, is not enough to be successful in as prestigious a league as the NBA. Don’t get me wrong, size will always be a plus. Though as time has gone on we’ve begun to realize how much more skilled a big man has to be. Like developing good offensive post moves to beat defenders and score consistently, also becoming much smarter on defense so that they can guard more effectively.

Gone are the days where you could just idol in the paint and throw your hands up. Now you need to be able to guard perimeter players, switch on smaller players that can beat you with quickness. Gone are the days where you can just bully your way into the paint and run over people. You need some finesse in your game and some polish in order to stick around in the NBA.

Players like Joel Embiid, Hakeem “the dream” and Boogie all optimize what it means to be a skilled big. These players were/are more than just their size, they could do things men that height should only be able to dream of. They had success because they learned how to be great beyond being big, but these players didn’t:

Those are a few of the all-time big men busts. Guys that came and went and were easily forgotten because beyond being 7-foot skyscrapers there wasn’t much else to them. Too slow to effectively guard anyone, to uncoordinated to handle the rock, not skilled enough on the low block to do any real damage. Driving layups and cross key buckets were out of the question. Most of these guys thrived on east put backs when no one blocked out, and under the basket cherry pickers.

I can see an AAU coach salivating over a 6 foot 10 man child walking into his gym trying to make the squad. The problem though is that whole time coach doesn’t see him drive and dishing, shooting 3’s, doing post spins, sky hooks, or even floaters. Coach honestly could care less if the guy could even make a free throw. All he sees is 3 or 4 blocks a game and a glass cleaner. The guy will probably get those stats too, I mean he’s gigantic. However, that same coach will never try to develop him into a better player and a more complete player. So one day years later he’ll click on ESPN and see that same guy in the G-league affiliate or maybe even out of the NBA altogether.

He couldn’t complete with players like Nikola Jokic, Nikola Vucivic and Anthony Davis. He was doomed from the start because his coach never prioritized developing his game. Big guys at the earlier levels are told to just go and be big, and this is destroying young men’s futures. Then you get all these “raw prospects” which really just means tall guy with no fundamentals just size and measurements.

← Hornets End Wizards' Winning Streak 3 is Worth More Than 2! →